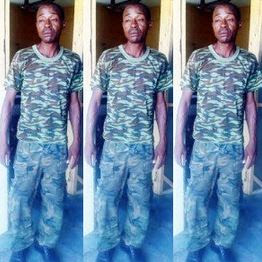 Police in Lagos have arrested a member of a suspected robbery gang that usually wore military camouflage while robbing unsuspecting private and commercial vehicles trapped in traffic around Mile 2, Festac, Alakija and its environs.

Police sources said it was discovered that the suspect was a dismissed soldier. He was said to have been dismissed from the Nigerian Army over unethical conduct.

The 43-year-old suspect, identified as Adokie Tombra, revealed that he wore Army camouflage to evade paying fare each time he boarded commercial vehicles.Vanguard gathered that Tombra was apprehended by policemen attached to Festac Division, in full Military regalia, while members of his gang were attempting to escape after a robbery operation.


“I resigned from the Nigerian Army several years back. Usually, I wear this Nigeria Army camouflage every time I am going out so I will not pay fare.”