EFCC, AGF, NSA and others Fight over Abacha Loot 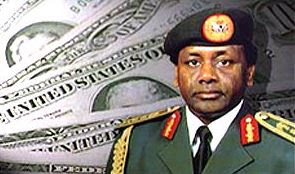 Offices of the Attorney-General of the Federation (AGF), the National Security Adviser (NSA) and the Economic and Financial Crimes Commission (EFCC) are trading blames in court over which one of them is in custody of what was recovered from the money looted from the nation’s treasury by the late Head of State, Gen. Sani Abacha.

While the EFCC said the recovered funds could be accounted for by the offices of the AGF and the NSA, they have both denied knowledge of what has been recovered and where it is being kept.

The claim among the three Federal Government’s offices is captured in the court processes they filed in reaction to a suit filed by a group, the Legal Defence and Assistance Project (LEDAP), seeking information about the state of the recovered loot.

LEDAP, in 2011, instituted the suit under the Freedom of Information Act after the EFCC (earlier named as the sole defendant) refused its request for the information.

It later joined the AGF and the NSA when the EFCC, in a counter-affidavit, said it was only offices of the AGF and NSA that could account for the recovered looted funds.

An EFCC official, Austin Emmumejakpor, said in the counter-affidavit of March 5, 2012, that he was “informed that remittances relating to the estate of the late Gen. Abacha were coordinated by the offices of the National Security Adviser and the Attorney-General of the Federation and not the respondent (EFCC) as erroneously thought by the applicant.”

The offices of the AGF and NSA, in separate counter-affidavits filed by their lawyer, Godwin Onwusi, denied knowledge of details of the recovered loots. They urged the court to excuse them from the suit.

In a counter-affidavit dated March 25, 2014, both offices denied custody of the requested information on behalf of both the AGF and the NSA, stating: “That the 1st and 2nd parties sought to be joined (AGF and NSA) did not coordinate the remittances relating to the estate of late Gen. Abacha.”

In another counter-affidavit of January 28, 2015, it was stated that the 2nd party sought to be joined (NSA) did not coordinate the remittances relating to the estate of the late Gen. Abacha.

Lawyer to the plaintiff, Chino Obiagwu, has, in a reply on point of law, argued that both the offices of AGF and the NSA are parties necessary for the just determination of the case.

He argued that by virtue of the provisions of Section 21 of the FoI Act, 2011, “the onus is on such body to prove that the information is not within its control”.

Justice Mohammed has adjourned hearing on the applications to October 8.