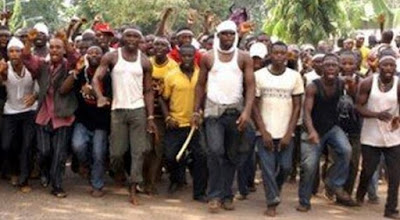 Protesting ex-militants, yesterday, barricaded the Mbiama axis of the East-West Road over alleged non-payment of their allowances by the amnesty office.

The protesters, led by the Bayelsa State Third Phase Amnesty chairman, Ebi John, trooped to the road as early as 7a.m., and blocked the road, obstructing free flow of traffic.

Motorists and travellers plying the route were stranded as the protesters chanted war songs demanding the payment of their allowances without further delay.

But military patrol vans and two Armoured Personnel Carriers, APCs, driven by soldiers were said to have swooped on the youths.

The soldiers were said to have shot into the air many times to dislodge the youths from the road.

John accused the amnesty office of insensitivity, adding that the office and the Accountant-General were deliberately delaying their allowances.

He said they earlier went to Abuja to lodge the same complaint but the Amnesty office unleashed terror on them using soldiers.