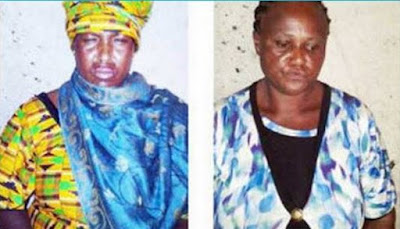 These are the house wives who were caught with cocaine stuffed in their private parts at the Murtala Muhammed Airport, Lagos.

Alaka Deburah Uzoma, 47, was found with 1.180 kilogrammes of cocaine as she inserted 260 grammes of substance in her private part and also ingested 60 wraps weighing 920 grammes.

The second suspect, Mrs. Chukwujekwu Chinyere Priscilla, 45 was caught with 1.455 kilogrammes of cocaine as she packed 59 wraps on her body, inserted one parcel weighing 1.285 kilogrammes in her vagina and ingested ten wraps weighing 170 grams.

They both claimed they ventured in to drug trafficking because their husbands abandoned them.They were en route China.