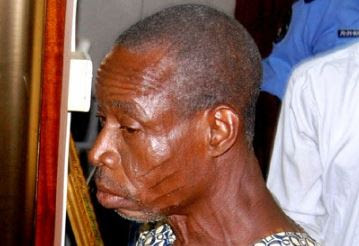 The Oyo State Police command has arrested a man who allegedly defiled his two daughters and two of his nieces. The victims are aged 14, 15, 15 and 17.The crime was allegedly committed at Moniya in Akinyele Local Government area of the state.

Though, the suspect, who is an herbalist, denied the allegation of incest saying he was being held for the crime he did not commit.However, the narration of the four girls brought many to tears at the State police headquarters, Eleyele, Ibadan.

While parading the suspect identified as Tajudeen Awoniyi, the Oyo State Commissioner of Police, Mr. Muhammed Katsina, said the accused had sex with his own daughters and his nieces.Speaking with newsmen, one of Awoniyi’s nieces, (surname withheld), described how her uncle took advantage of her.She said..

“On that fateful day, his daughters came to our house and wanted us to follow them to their place. On getting there, her father told us he would give us soap by mid night which we must use to bathe. Around 1:00am he woke me up, gave me a black soap and asked me to go and take my bath. After taking my bath, I went to him and he placed something under his tongue and asked me to sleep on a bench. He had sex with me. Afterwards, I was bleeding and he asked me to go to bed. By morning, he sent my sister and me out of his house.”