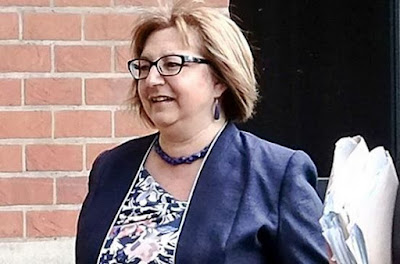 Anne Lakey, 55, is accused of taking the virginity of her 13 year old student while he was wearing his school uniform at her marital home when her husband travels.

The younger complainant said he would visit her when he played truant and they formed a friendship which the Crown said was "plainly wrong".

Their first sexual encounter happened when they played a game of dare and he exposed her breasts and fondled them, the jury was told.

On another occasion he was sitting talking to her when she was in the bath. She got out, wrapped herself in a towel, then lay naked on the bed and he followed her, the court was told.

He was in his school uniform when he then lost his virginity to her, Miss Goodwin said.

Lakey is accused of repeatedly having sex with one boy when he was 13 or 14 and another when he was 15. Neither can be identified for legal reasons.