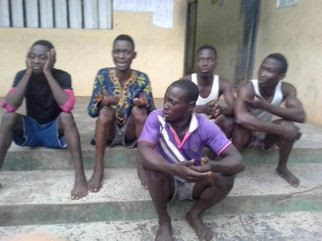 The dismembered body of a female student of a polytechnic in Ogun State, Miss Morenikeji Owolabi, has been discovered by policemen. PUNCH gathered on Wednesday that the body was found in a shrine on Tuesday in Eposo-Akaka community, Isara, in Remo North LGA of the state.

Some people are really wicked! The 21-year-old victim, who hailed from Ekiti State, but lived in Isara, was said to have been lured to the shrine by a herbalist, Femi Awise.

The culprit is on the run. Awise who was said to be a native of Isara, lives in Jabata area of the town.

However, five suspects have been arrested in connection with the murder. The suspects are an okada rider who conveyed Owolabi to the shrine, Adeyemi Ademolu; an apprentice to Awise, Omolaso Taiwo; Lateef Ali, Akinyemi Dare and Sokoya Wasiu.

The state Commissioner of Police, Mr. Valentine Ntomchukwu, who led journalists to the shrine, said investigation had commenced to unravel the circumstances which led to Morenikeji’s murder and the motive behind it.

The shrine, made with weather-beaten corrugated iron sheets, contained a large number of fetish objects.

An armchair, covered with cloth, was placed at a strategic spot inside the shrine. It was flanked by other plastic chairs. There were also bottles of palm oil and other liquid littering the floor.

There was also an iron pot filled with what was said to be cooked flesh of the victim, from which an offensive odour was coming from.

The decomposing legs of the victim, dug out of a shallow grave, were also recovered.

However, the head of the victim and other vital parts like breasts, hands, and vagina among others were not found. Something that was said to be her liver could be seen being roasted outside the shrine.

The police said Awise perpetrated his “evil deeds” under the guise of being a herbalist and a farmer.