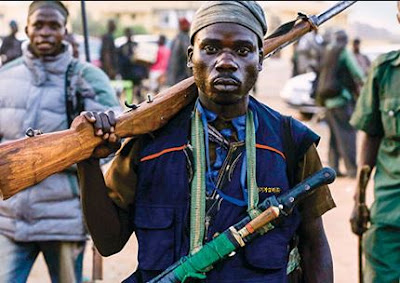 Seyi Adekunle of Living Faith Church, aka Winners Chapel was on Saturday evening abducted by gunmen who invaded the church while he and other pastors were having prayer session in the church in preparation for Sunday services.

The gunmen numbering five were said to have stormed the church at about 7.50 pm when the pastors were praying in the main auditorium of the church and shot sporadically into the air before grabbing the pastor and bundling him into their car and drove off.

“Normally on Saturdays, we have a number of activities but the pastors prayer session comes last, it was while the session was in progress that the boys came in, shot into the air and took our pastor away”. A source in the church told Vanguard.

Pastor Seyi who is the head pastor of Province Two of the Church located along IBB Way, opposite the Margaret Ekpo International Airport according to our source has been in charge of the church since 2014 and has been carrying out massive construction work in the crouch.

‘He came here in 2014 and has been doing a lot work through the construction of a massive complex for the church auditorium and office accommodation which might have given the kidnappers the impression that he has money to give them as ransom”.

When Vanguard visited the church at about 1.00 pm on Sunday afternoon, the second service in the church was in progress handled by Pastor Seyi’s assistants and there was police presence outside inside the hall and in the premises.

Mr Hogan Bassey, the spokesman of the Cross River State Police Command says the kidnappers are yet to make any demands “but we are closing on them and very soon I shall inform you on how far we have gone” he said