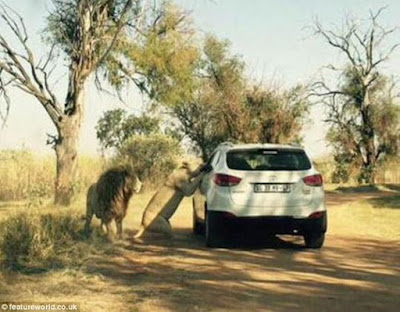 The horrifying moment an American tourist was mauled to death by a lion was captured on camera..

Engineer Ben Govender, 38, who was in the car behind Miss Chappell, said 'no one could have imagined' what would happen in the minutes after he took the extraordinary photograph.

Miss Chappell, 29, was killed in the safari park north of Johannesburg on Monday while taking a break from a two-week volunteering project on another nature preserve.

Mr Govender said that at first the male and female lions did not seem interested - and that the lioness stood up 'without warning'.

'It was terrifying. After the first bite the lioness retreated from the car with blood dripping from her mouth and paw.'We all thought she was done and didn’t like what she’d just bitten. But then like someone in a temper that wasn’t satisfied in a fight, she leaped back into the car and mauled the passenger.

The rangers came running in and the two lions ran off but the lioness had half the passenger’s shoulder in her mouth. And it was too late to do anything to save her.'

Mr Govender, who lives nearby, was visiting the park with his mother, sister and friends, when he watched the driver of the vehicle in front stop next to two lions and roll down his window.

He said: 'We decided to show our friends a local spot where they could see real lions in a "wild" setting. The SUV in front of us stopped next to two lions and the driver rolled down his window.

The passenger did the same, I presume to get a photo. The male lion didn’t seem very interested by this and at that point the lioness didn’t seem bothered either.'She got up very lazily and stretched out her body. Then suddenly without warning she stood up at the window of the SUV.'

'At first it just looked like an amazing shot of a lion stood up at the window. The lion can only have has its head in that window for around 15 seconds. At that moment the tourist was face to face with one of the most ferocious, incredible and magnificent animals.'But then the lioness lunged and we saw the driver diving into the passenger seat and punching at the lioness.'

Mr Govender said it appeared to him the driver did not have a chance to drive off or close the window.

'The lioness was just too powerful. After initially retreating she then came back. It was extremely fast – all over in a matter of a couple of minutes. And all we could do was hoot for help,' he said. By the time the gamesmen had arrived Katherine – known by her friends as “Katie” – was dead.

The lions were swiftly moved to another enclosure while their victim was taken out of the car to resuscitate her.