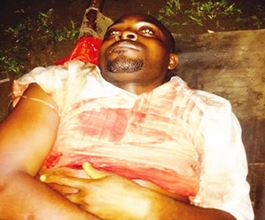 Gunmen, on Friday, stormed the residence of the National General Secretary of the Ijaw Youth Council Worldwide, Mr. Bristol Alagbariya, and killed one of his aides.

It was gathered that the gunmen, suspected to be assassins, had shot and killed Alagbariya’s personal assistant, simply identified as Silver, after realising that their target, the IYC general secretary, could not be found.

The incident, which took place along Ada George, in Port Harcourt, the Rivers State capital, scared passersby and other occupants of the building.

A source told Southern City News that Silver was later found in a pool of his blood few minutes after the gunmen left.

The source said, “Hired assassins with AK 47 numbering about four, on Friday invaded the residence of the National General Secretary of Ijaw Youths Council Worldwide, Engr. Emmanuel Bristol Alagbariya, brutally murdered one of his personal assistants in cold blood and scaring the life out of everyone they met after realizing that the target man was not around.

“The IYC general secretary, who has been fully engrossed in preparation for an upcoming Rivers Ijaw Summit in commemoration of the 58th year of the Henry Willink’s Minority Commission and celebration of some revered heroes for their selfless contributions towards the recognition of Niger Delta, was said to have convened a meeting of the Rivers Ijaw summit organising committee at his residence.

“While committee members were waiting for him to join them, a bus belonging to the National Secretary drove into the compound and was swiftly followed by the assassins who were all along laying siege outside his compound.”

“They surrounded everyone believing that the national secretary was in the bus, but to their disappointment, their target was nowhere to be found. In that frustration, they proceeded to the room where the committee members were about to meet and ordered everyone to lie flat.

“It was at this moment that one of the gun crazy assailants, for unverifiable reason, decided to shoot and kill the personal assistant to Alagbariya,” the source added.

A statement sent to Southern City News via electronic mail, disclosed that security had been beefed up around Alagbariya while the Rivers Ijaw Summit would still hold as planned in Port Harcourt.

Mohammad assured that the police would apprehend those behind the dastardly act and bring them to justice.