Home Gossip News If Buhari wants to tackle Boko Haram by travelling the world, let him do... - Wole Soyinka

If Buhari wants to tackle Boko Haram by travelling the world, let him do... - Wole Soyinka 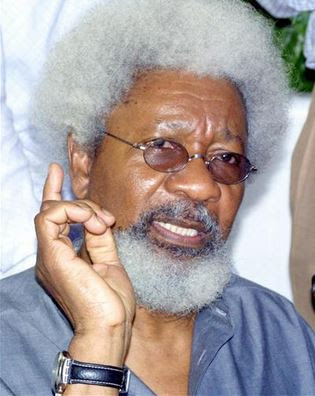 Noble Laurette Professor Wole Soyinka addressed the reason behind his support for Buhari in a new interview with Punch..Read excerpts

A lot of Nigerians still wonder why you chose to endorse the candidature of Muhammadu Buhari. Why did you do that?

I was exercising my democratic right.

So, how do you see Buhari as someone who is competent to rule this country?

Let us put it this way, if this country had gone on the way it was going, the way things were shaping up; if this nation had continued for another two years, in fact, I will say, it would not have lasted two years. So the word, ‘change’ for me, was not a slogan. It is not a mere slogan. The nation needed new hands at the wheels of governance. That is quite clear.

In essence, you are saying that the administration of former President Goodluck Jonathan did not do well and could have plunged the nation into ruins?

Mr. Journalist, do not try to put words in my mouth. Listen to and report exactly what I tell you. This country could not have survived another two years, in my view, in my assessment in so many directions if the status quo had been maintained for another two years.

Since Buhari has been inaugurated, are you part of those who think he should have hit the ground running by making all the necessary appointments?

I believe that any incoming political leader, anybody at the head of government should be given at least a little time to develop his own rhythm. I do not think it is right to impose one’s own sense of governance rhythm on anyone. This county was not coming from ground zero. This new administration is not just getting in at ground zero, but somewhere below zero. So I think, we should just give some little time for any incoming government to find its pace, decide its own priorities. I have mine, you have yours. Everybody here has his or her priorities. In fact, mine changes all the time, depending on whether electricity is flowing or it is not flowing. So let us just give the government a little time.

In your opinion, who do you expect to see in Buhari’s cabinet?

Do you think the diplomatic shuttle by Buhari to Niger and Chad is capable of defeating Boko Haram?

That is an answer to an earlier question which you posed. Obviously, Boko Haram is very much on his mind and constitutes a priority.

But some people have said that he should stop seeking for outside help?

This is exactly how we got into this mess because we did not seek help at the right time. If we had sought outside help when those girls were kidnapped, things would not have been the same. But it was too late. They would have been rescued if help was sought at the proper time or necessary actions had been taken. So we dragged our feet and I heard statements like ‘oh this is a national problem, we will solve our own problem.’ So there is cynical false pride. And when lives are at stake and the future of our children is at stake, people should swallow their pride and look for help because that becomes not just a national priority, it becomes a humanistic priority. So, if he wants to travel round the entire globe in order to solve the issue of Boko Haram, please just let him do so.