Home Gossip News Indian Billionaire gives away His Wealth, Becomes a Monk to Live in Poverty

Indian Billionaire gives away His Wealth, Becomes a Monk to Live in Poverty 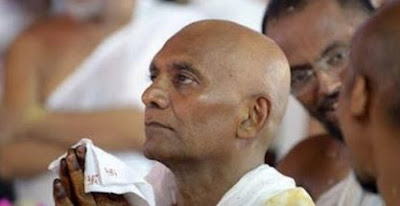 You can't really tell what people are capable of until they show you. 58-year-old Bhanwarlal Doshi, who was profiled by Forbes and said to be worth over $600m (over N120billion), is a popular businessman who runs a plastic company in Delhi, India.

To the surprise of many, Doshi has converted into the famous Jain monk’s life, prompting him to give up his entire empire.

To kick-off his monk life, a lavish three-day send-off party was thrown for him, where 1,500 people served food to guests. After the ceremony, he is expected to live in abject poverty with no maids or money or any physical possession.

Times of India reports that, “The venue [of the send-off] was built in the form of a ship. 500 hotel rooms were booked to accommodate guests. An estimated 150,000 people participated in the event.”

He got converted on Sunday and became one of the disciples of Jain Acharya, Shri Gunratna Surishwarji Maharaj.

Reports said Doshi had always wanted to become a monk after he listened to Jain’s lectures in 1981, but it took him time to convince his family.