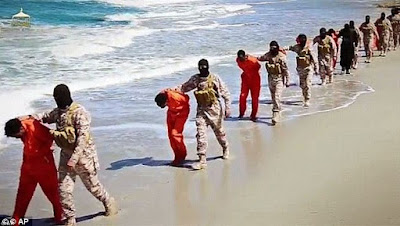 The defense official confirmed initial reports of the mass kidnapping after seeing a recent intelligence report. The convoy was ambushed by militants south of Tripoli before dawn this past Wednesday morning.

Meron Estafanos, the co-founder of the Stockholm-based International Commission on Eritrean Refugees, said that the group of migrants included "about 12 Eritrean Muslims and some Egyptians. They put them in another truck and they put 12 Eritrean women Christians in a smaller pick-up".

Estafanos said that the militants had initially stopped the truck and demanded that the Muslims on board make themselves known. Everyone who responded was asked about the Koran and their religious observance in an attempt to catch Christians pretending to be Muslims.

The main body of the group was put back on the original truck. As the militants drove the vehicle away, at least 9 men attempted to escape by diving off the back of the truck. Estefanos said 3 of those who had escaped were safe, but still trying to get out of Libya. The fate of the others was not known.

Libya has become a jumping-off point for thousands of migrants from the Middle East and sub-Saharan Africa who attempt the dangerous Mediterranean crossing to southern Europe. However, Libya's ongoing instability has led to an increased presence by ISIS and other terror groups, increasing the risk for Christians and other non-Muslims attempting the crossing.