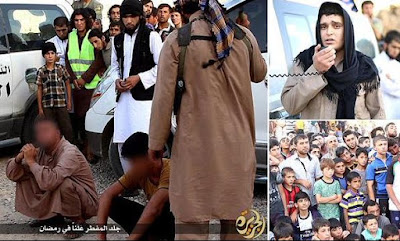 ISIS publicly flogged two men who were accused of secretly breaking the Ramadan fast and lying about their 'crime'.

Photographs released by ISIS' Information Office show the men being punished in a desert clearing.

A young terror commander is seen reading out the charges against the two prisoners, while a huge crowd of bloodthirsty locals struggle to get a better view of the brutal punishment.

This comes just days after ISIS savages tied two young boys to a pole by their wrists and left them hanging in the air for several hours after accusing them of breaking the Ramadan fast.

The shocking incident took place in the village of Mayadeen in Deir Ezzor province and involved boys 'aged under 18', according to the Syrian Observatory of Human Rights. 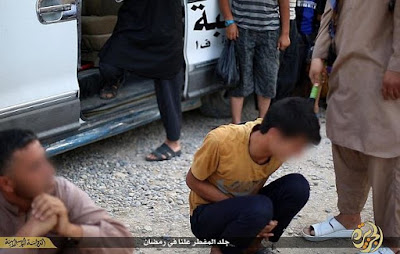