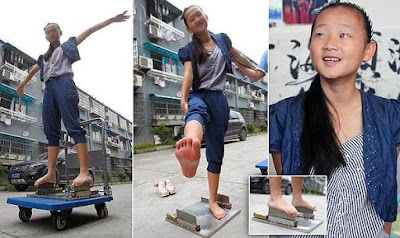 A teenager from China has amassed fans on the streets as well as the internet by walking on steel blades barefoot.

The 13-year-old school girl, who is surnamed Xie, has followed in her father's footsteps as a street entertainer and now plans tour around the country, reports the People's Daily Online.

Xie, can carry two jugs of water, each weighing 5kg, while performing the stunt. She can even write calligraphy while balancing on a knife's edge.The young performer has been practicing the art of blade walking with her father, Xie Jikui, since she was seven. 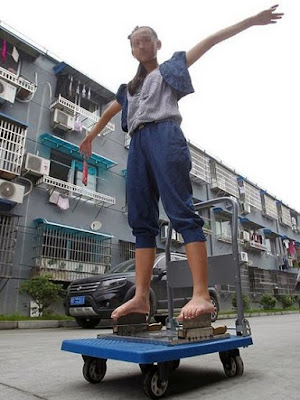 Jikui himself has been working as a street performer and magician since he was 10.
In order to take care of his daughter, he would often take her to work where she would sometimes join him on stage.

Inspired by other performers, he decided to learn blade walking with his daughter. It's usually a stunt for men but Jikui thought that this would make his daughter stand out from the crowd. Xie now travels alone to many of her performances.
'When I started practicing, I was very scared and was injured a couple of times,' said Xie.
Jikui expressed that although it's a dangerous art, his daughter had an interest in learning the skill.It's a lucrative business as a single performance can bring in anywhere between 300 to 800 Yuan (£30 to £80).

As a result, Xiao Xie's father hoped that she would drop out of school to concentrate on performing. Xie, however, has more liberal ideas about education herself.
She said: 'Technology is so advanced now, if you want to learn, you can even teach yourself with videos.'
She hopes to finish secondary education, however, but has no long term plans. 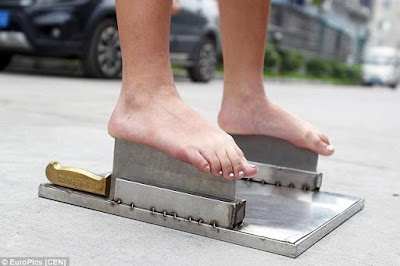 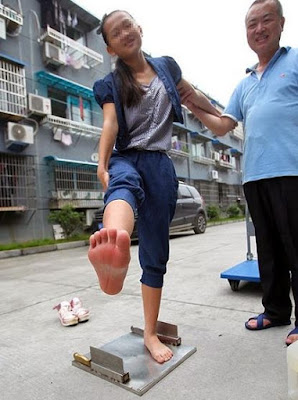