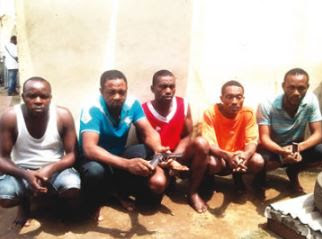 A suspected member of a car-snatching gang, Sunday Ozor, has said the gang’s mode of operation was to cause a minor accident so that the proposed victim would stop.

The 39-year-old from Boki Local Government Area of Cross River State added that when their victim came down to inspect the extent of damage, the gang member would swoop on him and snatch the vehicle.

The police said they also recovered eight vehicles, which included a Toyota Highlander, a Lexus, and a Toyota Corolla, allegedly snatched by the gang in different areas of Lagos.

It was learnt that Uzor, said to be the gang leader, was apprehended by SARS on Saturday, May 2, in Onitsha, Anambra State, while trying to sell one of the stolen vehicles.

He was said to have led the operatives to arrest the other gang members.

Speaking with PUNCH Metro, Uzor, who is married with two children, denied being the gang leader.

He said,
“Sometime in April, we went to the Igando area at about 7.30pm for an operation and we saw a lady driving a flashy car. We hit her car from behind and when she came down, our gang leader, Danjuma Sule, pointed a gun at her.
“Another gang member entered her car and drove off. We also took her away from the scene and dropped her on the Obadore Bridge. The vehicle was taken to Onitsha for sale, but the police have recovered it.”
Chukwu, who hails from Umunze, Anambra State, said he had sold six stolen cars for the gang.

He said,
“I am based in Onitsha, and I sell the cars for the gang. There was a car they brought to me, I sold it for N700,000 and gave the gang N500,000. I have received about six cars from them. I knew they were snatching them, but I was in a financial mess. I did not have any option.”