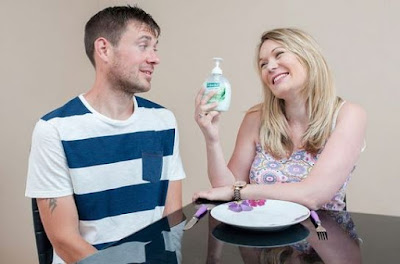 A Mum-to-be has developed a bizzare pregnancy craving for soap.Jess Gayford who is nearly eight months’ pregnant with her second child, started with bars then moved on to liquid soap.She now gets through up to two bottles a week.


“It came out of nowhere. I wanted to lick a bar of Dove soap. I went to buy a bar and started licking it. It sounds disgusting but it’s really nice.”“In my first pregnancy I wanted to eat baked beans and cheese but nothing weird.”


Her husband, Lee was worried at first but they have been told it won’t harm their unborn daughter.

The condition pica, which mainly affects children and pregnant women, causes people to eat non-food items such as sand, ice or paint.