Missing ex-cult leader tied with log of wood, thrown in to Lagos Lagoon 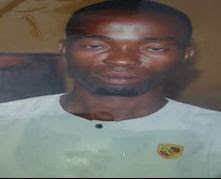 The missing ex-cult leader,30 year old Godwin Victor, aka Sangba, who was abducted by members of his former cult group for embracing normal life, has been found dead.

It was learnt that Sangba’s hands and legs were tied, while a log of wood was also tied to his neck before he was thrown into the Lagoon.Policemen reportedly recovered his corpse around the UNILAG waterfront on Thursday.

It was reported last Friday that Sangba had quit his group due to fear for his safety and police harassment.Some of his friends, who did not support his decision, attacked him.

However, when he came back to check his family, he was abducted.A police source said,

“The man has been killed. His two hands and legs were tied with ropes. The cult guys tied a heavy log of wood to his neck and threw him into the Lagoon. His corpse was recovered around the UNILAG waterfront.”

“His wife reported a case of missing person to the police on Monday. Since then, we had been out looking for him until on Thursday when we were informed that a corpse was found inside the Lagoon. It turned out to be him.”

Nwosu said the victim’s remains had been deposited in a mortuary, while the matter had been transferred to the State Department of Criminal Investigation.