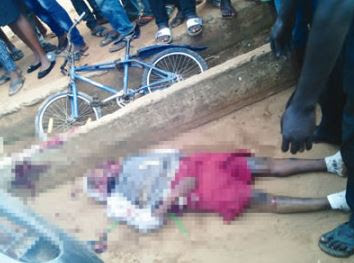 An angry mob has set ablaze a policeman’s vehicle on Abeokuta Road, Ijebu Ode, Ogun State, for crushing a schoolboy to death.

PUNCH Metro learnt that the boy, identified simply as Ope, was crushed at about 4pm while returning from school on Wednesday, and he reportedly died on the spot.

It was gathered that the deceased, who wore the uniform of Moslem Comprehensive Junior School, was riding a bicycle by the roadside when the vehicle hit him.

The policeman who drove the vehicle, said to be an officer attached to the Special Anti-Robbery Squad, was said to have abandoned his vehicle and fled the scene when he saw that the boy had died.

A mob, which gathered at the scene, was said to have set the policeman’s vehicle ablaze, and also protested against the policeman’s action, leading to shop owners closing their shops, while pedestrians hurriedly fled the area.

A resident, who claimed to have witnessed the incident, Saheed Ajala, said policemen from the Obalende division later came to remove the boy’s corpse.

Saheed added that no one in the area could immediately identify the name or address of the victim.

“The boy was riding a bicycle by the roadside; he was on his way home. The policeman’s vehicle threw him against a culvert, and he died instantly. The policeman wore a black T-shirt with SARS written on it. He fled the scene on seeing that the boy was dead.

“A crowd of sympathisers gathered at the scene and lamented the reckless driving of the policeman. Later, some policemen came and made efforts to take the car away, but the mob frustrated them.

“They destroyed the vehicle and set it ablaze. There was commotion on the road as residents fled, and shop owners quickly locked their shops.”

One of the shop owners in the area, who declined to give her name, said the burnt vehicle was still at the junction as of Thursday.

“The burnt vehicle is still at the junction. We don’t know if the boy’s family members have shown up at the police division.”

A teacher at the Moslem school, who spoke on condition of anonymity, told our correspondent that Ope was in Junior Secondary School two before his untimely death. As a matter of fact, everybody was sad in the school today (Thursday).”

Our correspondent learnt that the police had deposited his corpse in a public morgue.