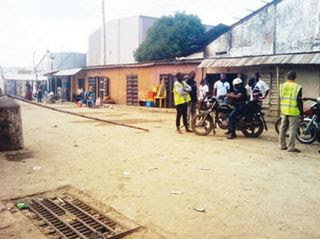 A 38-year-old motorcyclist, Obinna Ekusaba,has been arrested for allegedly raping a primary six pupil for six months in the Kirikiri area of Lagos State.

According to Punch, the incident happened from December, 2014, to May, 2015, on Karimu Street, Kirikiri Town.

Ekusaba often patronized the victim’s mother who sold cigarette and alcoholic drinks in a motor park on the street.

One fateful day,while the mother was away,the suspect called the 11-year-old to bring a bottle of drink into an uncompleted building in the motor park.

When she took the item there, the suspect lured her with money and raped her.The suspect is said to have subsequently defiled the victim several times before her mother observed on May 19 that her private parts had enlarged.After putting pressure on her, she confessed that Ekusaba had slept with her.

In her Police statement ,the victim said

“On getting there, he put his hand inside his pocket and brought out N500; he asked me to enter. But I told him my daddy used to give me N500. He then brought out N1,000. As I entered the building, he removed my pants and put his private parts inside my own.

“After he removed it, I demanded the money and he brought it out. As I was about to collect it, he put it back inside his pocket. That was how Brother Obinna started sleeping with me.”

“I became worried because it was not like that before. I questioned her for hours before she confessed that it was a man called Obinna (Ekusaba) that had been raping her.

“She also said he would bring out his private parts and ask her to put it in her mouth. I could not bear it and had to report it to the police.”

The victim was said to have been taken to a general hospital where different tests on her confirmed that there was penetration.The police subsequently arrested the suspect, and upon interrogation, he reportedly confessed to the crime.

Ekusaba, who was married with four kids, said he slept with the victim both in the day and night.

“I came to Lagos 10 years ago and I started riding motorcycle.

“I know the complainant as the mother of the victim. She is like a sister to me. I have been making love with her daughter for long.When we started, I told her I would buy something for her, but I didn’t buy her anything. I slept with her five times.

“Each time I wanted to sleep with her, I would carry her on my lap. It was on the fifth time that I could penetrate.

“I slept with her at a car park. I did it during the day and night inside the park. I know I have committed an offence.”

He said, “It has been transferred to SCID, Panti for more discreet investigation.”