Home Gossip News N8bn scam: A common Cash assistant has N134m in one of his accounts - EFCC

N8bn scam: A common Cash assistant has N134m in one of his accounts - EFCC 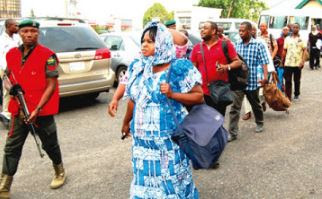 Hearing in the Central Bank of Nigeria N8bn mutilated currency fraud suit continued at the Federal High Court, Ibadan on Wednesday as the Economic and Financial Crimes Commission told the court that one of the accused persons, Mr. Ayodeji Alase, had N134m in one of his bank accounts.

Top officials of the Nigeria Central Bank, CBN, colluded with officials of private banks which included Alase, to defraud the country of about N8 billion.The scam involved the “theft and recirculation of defaced and mutilated currencies,”

Punch reports that,the EFCC told the trial judge, Justice A.O. Faaji, that Alase, a primary six certificate holder, started work at First Bank as a guard before he was promoted to the position of a cash assistant.

The lead prosecution counsel for the EFCC, Mr. Rotimi Jacob (SAN), also told the court that the accused had property worth hundreds of millions of naira.

Alase, according to the anti-graft agency, has a duplex at Oluyole Estate in Ibadan, a shopping complex, a warehouse at Podo, a fenced plot at Dugbe, a block of four flats at Apeye, two plots of land and five-bedroom flat in other parts of the state capital.He was alleged to have a credit balance of N132m in one of his bank accounts.

The commission also alleged that Alase possessed a block of five-bedroom flat at Apete area of Ibadan and a supermarket at New Garage, Apata area of Ibadan.

Other accused persons, including Olaniran Adeola, Ayodele Adeyemi, Isiaq Akano and others were also said to own property in South Africa, filling stations, cement shops, schools, supermarkets, exotic cars and buildings in several locations in Nigeria.

One of the accused, Mrs. Afolabi Olunike, was alleged to be the owner of a duplex, several plots of land, a storey building and another three acres of land.

Earlier during the hearing, Alase had delayed court proceedings when he claimed not to understand English Language when charges were read to him. But Jacob rose to fault his claim, alleging that although Alase was employed as a guard, he rose to become a cash assistant in First Bank Plc.

Justice Faaji later ruled that an interpreter should be provided for Alase to ease communication between the court and the accused. He pleaded not guilty to the charges.