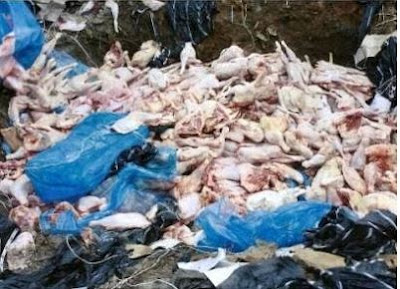 Although imported chickens and turkeys have become status symbol in Nigeria, the National Agency for Food And Drug Administration And Control (NAFDAC) has come out to strongly warned against the consumption of imported or smuggled frozen poultry frozen meat, even as it has said that imported poultry products, especially chicken and turkey have been discovered to be causative factor in non- communicable diseases (NCDs) and antibiotics resistance.

Although NCDs are non-infectious but they are deadly. Health conditions under NCDs include cancer, kidney disease, and hypertension among others. NAFDAC Director General,Dr Paul Orhii, who gave the warning at media briefing in Lagos, urged Nigerians to avoid imported smuggled chickens and turkeys, because they have been found to contain substances that can predispose one to kidney, liver and lung diseases as well as certain types of cancers and drug resistance- bacterial infections.

At the briefing, a study, titled “Prevalence, Quality and Acceptability of Frozen Poultry Meat in Major Cities in Nigeria” carried out by experts from University of Ibadan titled “, was presented. Although imported foreign chicken, turkey and along with other frozen poultry meat have been banned by the Federal Government, some Nigerians have cultivated the habit of smuggling the banned poultry products into the country to the ‘delight’ of some Nigerians who do not know the health implications of consuming such products.

Orhii said that patronising smuggled poultry foods do not only encourage economic sabotage, but also can damage peoples’ health. Orhii added that the studies have found out that most of the smuggled chicken into Nigeria contains high level of various deadly contaminants. Orhii said: “Our studies have found that most of these smuggled chickens or smuggled poultry products, may be because the way they are transported or because they are not properly packaged, they contain some contaminants. It can be formaldehyde, at times it can be high level of antibiotics residue and other contaminants like heavy metals. “And that is why we are discouraging members of the public from consuming them. We are particularly concerned about the high level of antibiotics residue, because these can cause drug resistance, resistance to antibiotics.” Orhii added that NAFDAC would begin strict enforcement of the ban on imported poultry products.

The nutritional toxicologist said the analysed smuggled or imported poultry food were found to be unsafe for consumption, adding that the continuous consumption of imported chicken and turkey could damage the human system on the long run, unlike poultry products produce locally, which have been found to be safe for consumption. Tewe said: “Consumers in the study area mostly consume chicken and turkey. Other poultry meats consumed are duck, geese, guinea fowl and quail. Sources of poultry meat sold is imported or smuggled poultry meat. A very small percentage (15.33) of the retailers sold locally produced poultry meat.

“It was discovered that the foreign poultry products contain high levels of formaldehyde, as well as high levels of metals and other substances which are lethal to the human body as against the locally bred poultry products which did not contain such substances. Heavy metals (which have been found to be present in imported or smuggled meat) may cause toxicity-related mutagenesis (mutation), carcinogenesis (cancer) and other severe health hazards. Others (result of heavy metals) are cardiovascular diseases, skin disorders, and neurotoxicity lung and nasal cancer in humans”.