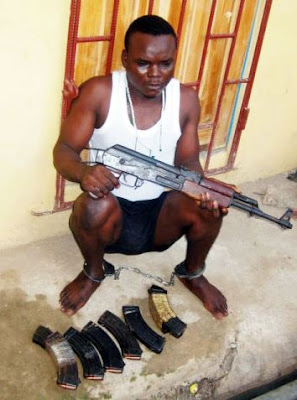 The police said the suspect was a member of 4 man gang and was arrested in the Igando area, allegedly at an auto spare parts market in Lagos where they sold the parts of stolen vehicles.

It was gathered that the gang would remove the number plates of stolen vehicles so that the buyers would think the vehicles were imported used vehicles (Tokunbo).

Okike, from Ohaozara Local Government Area of Ebonyi State, said he was preparing to take the stolen vehicles to Port Harcourt, Rivers State, to sell when he was arrested. He said that his only role was to drive the vehicles to the buyers.

“I worked formerly as a truck driver. That was in 2009. My boss was Mr. Ogbonna Okorie, who used to load bags of rice in the Seme area. My route is from Mile 2 to the border area. I also ply the Idiroko area in Ogun State. I came to Lagos in 2005, and I used to stay with my uncle in the Maryland area before I joined the gang.

“The first vehicle we stole was a Toyota Camry. I drove it to Benin, Edo State, where we sold it for N600,000. The second car was a Toyota Sienna which I took to Port Harcourt, Rivers State, and sold for N700,000. I sold it to one Lucky Oboh. We usually removed the plate numbers when selling so that our buyers would not suspect the vehicles were stolen. I was given N300,000 as my share.

“The third one was another Toyota Camry, which I drove to the Badagry area of Lagos to sell. The fourth was a Toyota Sienna and I was to also take it to Port Harcourt when the police arrested me. I am not the gang leader. The leader is known simply as Segun.

“My role is to find a buyer for the vehicle and drive it to his location after an agreement. It was the gang leader who operated with this gun. I was also a drug addict and I used the robbery proceeds to take care of my mother who had a poor health.”

The remaining 3 members of the armed robbery gang, Nonso, Segun and Donald are still at large.