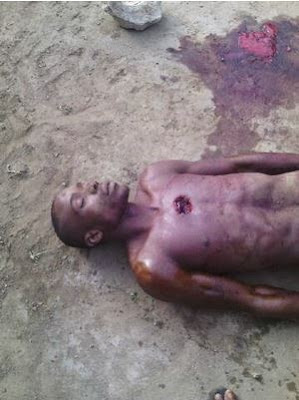 A panel beater at Obollo-Afor in Udenu Local Government Area of Enugu State has been shot dead while his colleague was badly wounded in an attempt to kidnap a returnee from Europe in his country home at Amube, Enugu-Ezike.

Vanguard gathered that the two kidnappers from Benue State had been terrorising inhabitants of the area, raping and robbing unsuspecting victims of their valuables till the attempt to kidnap the returnee at his building site.

The suspects, identified as Tessy Iyong, 34, sustained bullet wounds and several machete cuts, and Sesso Nyoaku, a panel beater and father of four, was shot dead while fleeing as the police accosted them, with support from local vigilante group in the area.

Vanguard investigations revealed that the kidnappers were dropped by a motorcycle at the building site of the returnee whose identity could not be ascertained at the time of this report, met a young man with a metallic Toyota Camry, and enquired if he was the owner of the building under construction.

It was further learned that when the young man said he came to see the owner of the project, the suspects disbelieved him because of his physical frame, pointed a gun at him and demanded his car keys which he surrendered without hesitation and they drove away.

Workers at the site were said to have immediately put calls across to Igbo- Eze North police division that a car had been snatched at Amube, prompting pursuit of the suspects.

It was gathered that the kidnappers abandoned the vehicle and fled into the bush, exchanging gun fire with the police.

The vigilante group in the community reportedly cordoned off the bush path, making it possible for the police to apprehend the suspects with gunshot wounds, even as an English made pistol was recovered from them.

One of the suspects, Tessy Iyong, told Vanguard that their mission was not to kidnap the returnee from Europe but to rob him of cash as they understood that he carried cash to the site as he paid his workers on daily basis.

Iyong explained that his dead accomplice, Sesso, was the one who brought the JOB since he understood the terrain as a panel beater who had lived at Obollo-Afor for sometime.

‘’We snatched the Toyota Camry to escape from the area, our intention was not to steal the car but to escape in it because the motorcycle that dropped us had left and we cannot trek to do that kind of work, it is risky.

‘’We know and that was why we took the car from the owner, although we thought he was the actual owner of the building when we struck,” he said.