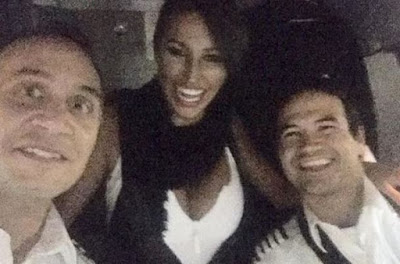 Two pilots have been fired after they let a busty Argentinian actress fly their passenger plane during take off.

Vicky Xipolitakis was filmed flying the aeroplane as it left the metropolitan city airport in Buenos Aires (Jorge Newbery) for the city of Rosario, in Santa Fe.

The pilot and co pilot broke international rules by letting an unauthorised person into the cabin.

The video shows the model shouting:


"I'm going to accelerate and will take off" and pressing buttons in the cabin as if she had been flying planes for years.

Meanwhile the pilots joke with her that she owns a bit of the plane because she is a tax payer and so is entitled to fly it..During the video she thanked the pilots for the "wonderful service" she had received and talks about the "scary" but exiting experience she had had.

The head of Aerolíneas Argentinas, for whom the two pilots worked, Patricio Zocchi Molina and Federico Matías Soaje worked, confirmed they had been fired as a result of their actions.

Mariano Recalde vowed to act “firmly” and have “justice investigate” the incident.


"These are responsibilities that have put lives at risk. As soon as we became aware of the situation, we dismissed the pilots."They are two irresponsible people who put at risk the security of people and we will request justice to investigate. “It is not an isolated matter but public, that’s why we will act firmly because nothing justifies what happened, and it will have to be analysed whether they committed a crime.”