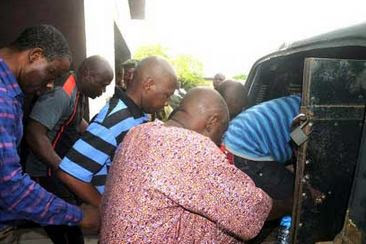 The Oyo State Police arrested two suspects, Adebayo Saheed and Bello Mustapha for allegedly being in possession of parts of human skull and hair.

The Police commissioner who paraded the suspects at the state Police headquarters, Eleyele, Ibadan yesterday, explained that the ambush squad of the command arrested the two members of a dangerous syndicate who specialized in duping unsuspecting members of the public.Vanguard reports...

He said the men,who were allegedly caught with human parts, always pretended to offer their victims spiritual assistance.

He said small pieces of human skull, hair, fake 900 dollars and some charms were found on the suspects.