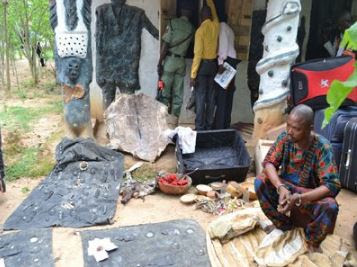 Another ritualists’ den has been discovered on the outskirts of Ibadan, the Oyo State capital, yesterday.The den, located at a remote village in Isase area of Ojoku in Ona-Ara Local Government Area, consists of two bungalows, a shrine and an underground tunnel.Fake foreign currencies, three exotic cars and fetish substances were recovered.

The principal suspect, Ismail Adesina (43), claimed that he is not a kidnapper but a herbalist.

“I am from Beyeruka in Ibadan. I am a herbalist who treats people suffering from diabetics, blindness, stomach ache, and other diseases. I use herbs to heal them, but when there was no sales, I ventured into defrauding people through diabolical methods.We were three who use to operate here and we have customers all over Nigeria. The names of my accomplices are Tajudeen Orji and Saheed.

“We have been in this business for four years. We have duped five people and we charge them between N150,000 to N300,000, depending on what they want us to do for them.Some people will come to us that they need a child, some want promotion in their office, some may be looking for favour and protection.”

The land vendor, Adegboyega Babatunde, claimed that the suspects bought two acres of land from him five years ago for N50,000.

“They claimed that they wanted to build a house for traditional medicine, until recently that we started seeing some suspicious activities.

“I will take back my land now and give them their money back because we do not want evil people in this community,” he said.

Commissioner of Police Muhammed Katsina led reporters and other security operatives to the den at 1:30pm.

“This place is a multi-criminal den that accommodates all manners of crimes, such as kidnapping, robbery and money doubling.Here is a place meant specifically for exploiting the public. Their victims cut across the length and breath of this country, some in Abuja, Lagos, Kogi and other states.This place was discovered by my men after a painstaking investigation.You are aware that a man was kidnapped in Kishi, although he was later released.But we never relented and this was the place where the man was kept for days.“ 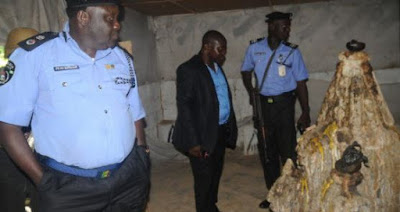