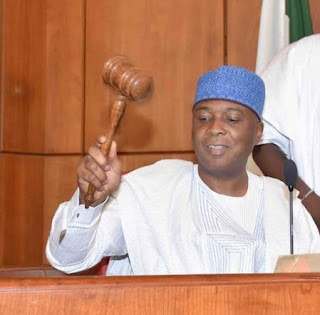 Following his dramatic swearing in as the Senate President,the Lagos State chapter of the All Progressives Congress has called on the national leadership of the party to punish Bukola Saraki, and the Speaker of the House of Representatives, Yakubu Dogara, for anti-party activities.

In a statement by its publicity secretary, Mr. Joe Igbokwe, while describing the re-election of Senator Ike Ekweremadu as Deputy Senate President ,an embarrassment to the party,the Lagos APC said they are saddened by Saraki's move to‘jump into bed’ with the Peoples Democratic Party in his desperation for power.The statement read...

“The purported election of Senator Saraki and Dogara as the Senate President and Speaker respectively, is a clear transgression of both the tenets of democracy and party politics. At this early stage, the APC must come down strongly to mete out sanctions and punishments against treacherous members that perpetrated this ugly charade at this early stage of the party’s life and history. “As a party and given the circumstances of our present politics, the APC stands no risk of being eroded by this treachery. Rather, we see the clear road to enforce discipline in the treacherous conduct of some members of the National Assembly.

“We see the need for the party to wield the big stick now to send a message home that treachery will not profit those who might want to cash in on similar circumstances to spite the party and cash personal benefits in the long run. It is certain that these betrayers are not members of the APC and we feel the party must weigh in now and discipline these betrayers.”