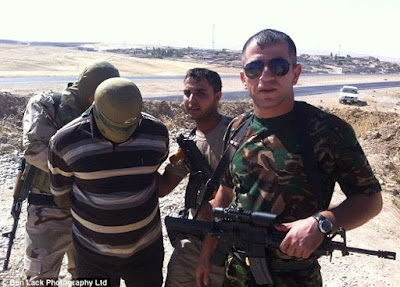 A Syrian Christian fighter has beheaded an Islamic State group (IS) militant to avenge people "executed" by the jihadists in northeastern Syria, a monitor said on Friday.

The Syrian Observatory for Human Rights said the incident took place on Thursday in Hasakeh province, where IS holds large areas of the countryside.

According to the monitor, the Christian fighter, a member of the minority Assyrian community, found the jihadist in the local village of Tal Shamiram.

"He took him prisoner and when he found out he was a member of IS, the Assyrian fighter beheaded him in revenge for abuses committed by the group in the region," Observatory chief Rami Abdel Rahman said.

The Observatory is based in Britain but has covered the Syrian conflict since it broke out four years ago thanks to a network of sources inside the country.

The Christian was fighting in the ranks of Kurdish forces who earlier this month drove IS out of more than a dozen Assyrian villages the jihadists had captured in Hasakeh.