Robbers escape by throwing money into crowd in Warri 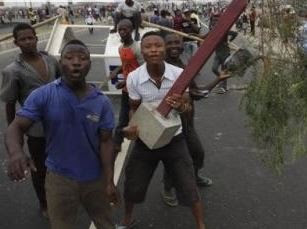 Three suspected bandits pursued by the police, Tuesday, sprayed bundles of naira on a crowd at Ajamuogha, Warri, Delta State, to cause commotion and make their escape easy. Their gimmick succeeded as people scrambled for the naira notes while they escaped, leaving the anti-kidnapping patrol team angry.

According to Vanguard,Police spokesperson in the state, DSP Celestina Kalu, who confirmed the incident, said:


“On Tuesday, at 11:45a.m., operatives of anti- kidnapping patrol team on routine patrol along Ajamugha Road, Warri, accosted a red Vento car with number plates DELTA UGH 519 MZ, with three occupants.
”On sighting the patrol team, the suspects zoomed off and the patrol team gave them a chase to Ajamugha Sharp Corner, where the three occupants alighted from the Vento car and ran into the crowd of people throwing money at the people. They eventually escaped.”The abandoned Vento car was recovered. On searching the vehicle, two cut-to-size double- barrelled guns, 31 live cartridges, 10 expended cartridges, four different pairs of car number plates, one Nokia 201 handset and one Lexus car key were recovered.“Efforts are on to track down the fleeing criminals.”