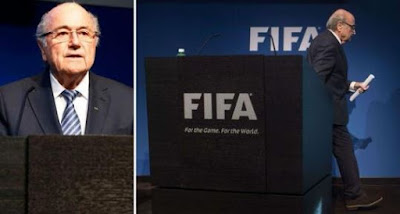 After 17 years in charge of the football governing body, FIFA president,Sepp Blatter has resigned .It comes as an explosive letter appeared to contradict its claims that Sepp Blatter's right-hand man was not involved in the payment of an alleged $10million bribe.During a press conference at the FIFA HQ in Zurich,the 79 year old who was re-elcected four days ago said

“I have thoroughly thought about my presidency and the 40 years Fifa has played in my life. I love Fifa more than anything else and I only want to do the best. I decided to stand again for election for the good of football.”

“Fifa’s interest are dear to me. That’s why I have taken this decision. What counts most for me, is the institution of Fifa and football around the world.”

"FIFA needs profound restructuring."Although members have given me the new mandate, this mandate does not seem to be supported by everyone.

"We will hold an extraordinary conference as soon as possible. A new president will be elected."

“My mandate does not appear to be supported by everybody”.