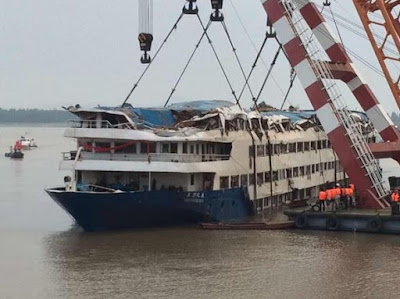 The Eastern Star is upright once again, looking almost normal with its bottom resting on the water and its deck and cabins clear above it.

The ship's positioning Friday was a step forward in the dayslong nightmare playing out on a section of the Yangtze River that flows through Hubei province. It means answers should be easier to come by as to why the Eastern Star capsized Monday night and what can be done to prevent similar tragedies in the future.


It also means closure could be coming soon to hundreds of families. 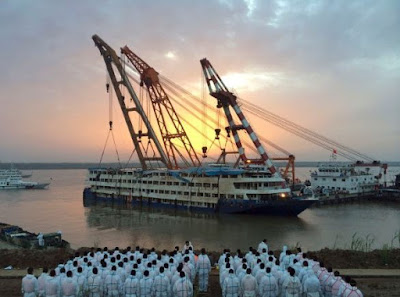 By 8 a.m. Saturday (2 p.m. West African time Friday), 331 bodies had been recovered, according to Chinese state media. There are 111 people still unaccounted for.

Of the 456 people on board, 14 survived. But rescuers have had no luck since Tuesday, when a 21-year-old sailor and 65-year-old woman were plucked from the water.

Authorities say the chances of more miracles have dwindled with each passing day. And the salvage process has begun.

That process involved huge floating cranes that set up alongside the overturned river cruise ship, dropped cables and hooks into the water, rolled the ship upright and raised it to the surface. About 50 divers took part overnight Thursday by tying slings around the 2,200-ton vessel.

State-run news agency tweeted pictures of the Eastern Star after this happened Friday. Parts of its top level looked smashed, but the other levels appeared largely intact. By draining the ship, the idea is that it could again float on its own. 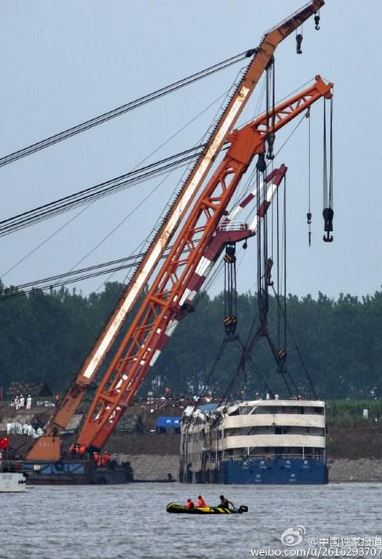