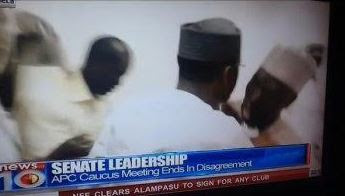 Corruption and oppression by government officials must be discouraged by all means if Africa is to attain self-dependence.

The influx of Africans into Europe and the Americas is a burden on the host economies and as has received abundant media coverage lately, is a worrisome cause of risk and death to the lives of intendent migrants.

While all the suffering and loss in Africa cannot be exclusively blamed on corrupt practices of the nation’s rulers and legislative bodies, the prevailing graft is a major bane of Africa’s development and hindrance to its attaining self-reliance. We must be serious and committed to banishing corruption for nations in Africa to rise-up to their responsibilities to their citizenry and also for them to be of use in salvaging neighbouring nations.

Nigeria, Africa’s most populous nation and a nation of immense wealth has remained stagnant, and rather than being a beacon, has increasingly become an economic and security threat to itself, its neighbours and the larger world.

Corruption in the executive, legislative and judicial branches has led a world top oil producer to the brink of economic, social and security collapse if not beyond. Thousands have died in north and south terror and as many as 5 million have been internally and externally displaced. Oil spillage has caused an environmental calamity in the nation’s Niger delta.

Oil wealth is Nigeria’s curse. Democracy thus far has been a nuisance to Nigeria rather than a help. Apart from elections never being free and fair, it is realised that Nigerian masses (who might vote these corruption committed officials) are ill informed, too poor and otherwise unprepared for democracy and constantly taken advantage of. The system cheats us and must be controlled by external processes. For 16 straight years of democracy, the open subversion and exploitation of the democratic institution by the executives and legislators in the full view of helpless masses has led to a state where a handful of government officials and their friends consume 80% of the nation’s wealth and the 170 million masses live off of 20%.

Each branch of government and each public parastatal has been left to carve out humongous, ‘jumbo’ pay packages while leaving the masses to less and less. Our representatives supervised this process across parastatals busy carving out their own outrageous emoluments.

The consumption of wealth has not only been a distraction to officials, but also intoxicating, with legislators cutting up as much and more than $2 million (N400 million) per annum, they have forgotten their duty to represent their constituencies; even those from terror ridden areas have totally disconnected with home. Indeed the legislators prefer to sponsor and facilitate terror and chaos to keep the masses distracted and incapable of facing and combatting legislative and executive looting.

$2 million a person per year is a lot of money by all standards and across all borders, we must agree.

The National Assembly budget in Nigeria has been N150 million per year; that is about $1 billion per year for just 469 assemblymen in two congresses. Whereas 80% of Nigerians live under $700 per year, with 100 million Nigerians being destitute, earning less than $360/year or a dollar-a-day. Almost N1000 / $5 is taken per head for 170 million Nigerians by these ‘lawmakers.’ This is colossal looting of unseen proportions in human history. Indeed a crime against humanity.

It took Nigerians four long years to achieve some meaningful repair at the top, with the recently concluded March presidential elections demonstrating the will of Nigerians to rid the nation of plundering administrators. But while the elections delivered change in the sacking of a family of PDP presidents who had institutionalized corruption and dredged government and big business railroads for the funnelling of billions of dollars public money into the hands of a few, Nigeria’s congress, its legislative arm remained unchanged and unrepentant.

Making global headlines for signing 46 bills in 10 minutes, the legislators who barely pass 100 bills in four years have utilised their unchecked power and bargains with the previous corrupt executive leadership to secure for themselves irrevocable powers, life immunity, humongous wages and stupendous pensions. These are the untouchables of Nigeria. Legally kept in secrecy, the National Assembly $1 billion budget is not even open to public review.

There are few channels of redress for Nigerians. Unlike with the corrupt presidencies where we simply voted them out, with the legislators, it is only they that can vote themselves out. It is only the lower House that can vote to scrap the senate and to cut the number of representatives by half as Nigeria desperately needs. Even if a referendum was an option, we all know the effect of throwing looted billions in campaigns on the economy and people of Nigeria. Looted wealth corrupts absolutely. Nigeria is yet to recover from the flooding of the economy with stolen billions by the incumbent in the past presidential election.

Therefore we call on all nations, African and European; we call on the United Nations and all global bodies to empathize with the Nigerian suffering and dying masses and live up to their responsibilities to the human cause.

We request sanctions on Nigeria’s legislators. We ask for travel restrictions and the freezing of their accounts and assets. Nigerians ask you to help us with these shameless lawmakers who have given themselves immunity within our country.

We ask for your help against these lawmakers who could pass no bills to help the thousands of abducted and violated girls and boys in the northeast. We ask you to sanction these thugs who failed to hold the nation’s army chiefs to task and watched as they continued to violate international laws of engagement and perpetrate war crimes while alienating the local indigenes and empowering terror.

We ask for broad-reaching sanctions against Nigeria’s lawmakers past and present till that body is radically limited and put under check.

For your attention: below is a list of implicated senators, who Nigerians more commonly call, legislooters. Several are indicted for various financial crimes; some are wanted globally for crimes including drug peddling and laundering. Some have even been charged with terrorism. Our Independent Electoral Commission, INEC permits these violators and others with fake or even no diplomas and degrees to be listed on the ballot. There is an additional list of 360 Representatives, not appended due to length.

We have begun protests against the corrupt senate in Nigeria and around the world, and will continue to do so at the Nigerian senate and the nation’s consulates abroad to remind you all of your obligations to protect Nigeria’s democracy and its people, the helpless victims of a grand broad day light, billion dollar legitimised legislative fraud. Protests is the only tool we have at our disposal as we cannot resort to violence or retaliatory economic terror.

We count on your action.