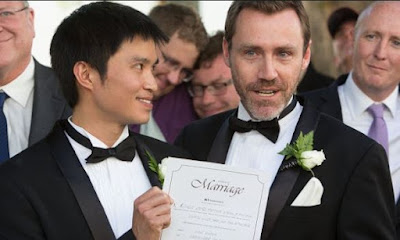 The US Supreme Court has ruled that same-sex marriage is a legal right across the United States. It means the 14 states with bans on same-sex marriage will no longer be able to enforce them. Justice Anthony Kennedy wrote that the plaintiffs asked

"for equal dignity in the eyes of the law. The Constitution grants them that right."

It is unclear how soon marriage licences will be issued in states where gay unions were previously prohibited. The ruling, which sparked celebrations outside the court in Washington DC, brings to an end more than a decade of bitter legal battles.

President Barack Obama said the ruling was a "victory for America. When all Americans are treated as equal, we are all more free " he said.

However, Christian conservatives decried the decision.

And Kellie Fiedorek, a lawyer for an anti-gay marriage advocacy group, said the decision "ignored the voices of thousands of Americans".