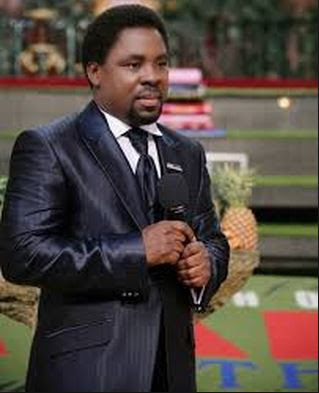 Various reactions have come in the wake of America formally legalising gay marriage across the entirety of its borders but one of the most unusual has sprung from a popular Nigerian cleric.

The clip titled, ‘Deliverance From Homosexual Demon’ shows a Nigerian from Imo State who identified himself as ‘Tedus’ receiving prayer at the church of T.B. Joshua in Lagos, Nigeria.
“I made him gay; I made him love men,” the young man says after being questioned by one of Joshua’s ministers, the clip clarifying that it was an ‘evil spirit’ speaking, which was allegedly behind his homosexual tendencies. Tedus is subsequently ‘delivered’ and later shares his experiences about how the ‘devil’ of homosexuality had possessed him.


He narrated how, upon his return from a business trip in Asia, he had lodged in a hotel in Kenya where he met some male friends who suggested they go for a swim in the hotel pool. “After swimming, I went back to my room and had a dream,” Tedus recounted. “I dreamt where I saw myself swimming in the same pool with naked men.

When I woke up, I felt as if something entered into me. I started having passion for men.” Upon returning to Cameroon where he was based, Tedus ‘sacked’ his fiancé without any explanation. “I had no passion for her anymore – no more affection. She was astonished and asked so many questions which I couldn’t abswered. On the internet, I discovered so many things on gay websites and began downloading gay pornography. That’s how it started.”

According to Tedus, he saw his newfound homosexual lifestyle as ‘normal’ until his pastor in the church where he worked as a translator called him aside privately. “He told me that I had to go to Nigeria to The SCOAN and that I needed deliverance.” Tedus reluctantly agreed. After making the journey in December 2013, when the time arrived for people to receive prayer in the church service, he described a sense of anger welling within him as one of Joshua’s pastors approached. “When he prayed for me, I lost control,” he described.

“I knew I was talking but I never knew what I was saying.” Since receiving prayer, Tedus testified that all homosexual feelings have left him. “Those feelings for men are no longer there; I have real passion for the opposite sex. I couldn’t control the former passion.” The clip then jumps to almost one year later where Tedus returns, this time with a young lady whom he introduced as his fiancé. “The Bible says that a man ought to be with a woman.

After my deliverance, I travelled to Imo State and there I met this wonderful lady and proposed to her,” he said, with a large smile, testifying that is life has changed ‘tremendously’ since receiving prayer. “My advice is that if you come across somebody that may be having the same problem, you shouldn’t criticise them but rather pray for them,” he said. “People just believe it’s a normal thing; it’s not just ordinary. There is a force or spirit behind it. The only way out of this is deliverance. It is like a virus. Once it gets into you, it is only deliverance from Jesus Christ that can get you out of it.” In his comments, T.B. Joshua quoted Matthew 7:1, stating that Christians should ‘talk salvation, not condemnation’. “God hates sin, not sinners,” he insisted.

“When I say, 'Do not judge so that you will not be judged', I mean we should hate sin, not the sinner because sinners can change. If you have killed a sinner by judging him, there will be no opportunity for change. Sinners can be delivered. We should hate the act, not the people because our battle is not against flesh and blood but against the 'spirit beings' that cause all these acts.”

He then went further to clarify his stance: “The Bible is my standard. If my parents were one, I would not have been given birth to.”