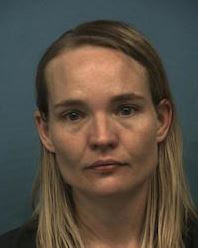 Megan Hoelting didn't find that guy, and it probably had something to do with the fact he was friends with her husband.

31-year-old Hoelting was charged with "felony burglary with the intent of committing a sexual assault" after she allegedly broke into her husband's friend's house on Monday. The man told police that he awoke to a woman "straddling his legs and dressed only in her underwear" before he felt "the offender place his penis in her mouth."

The man said he felt around for a flashlight to see who was rocking his world, but he had to settle for a flashlight app on his phone. That's when he noticed the woman had her "breasts exposed" as well as the fact that she was his buddy's wife.

He ordered Hoelting to leave his house, but she refused. He called 911, and now Hoelting has another mug shot.

No word on whether he would have let Hoelting finish if she would have been any other woman besides his buddy's wife.