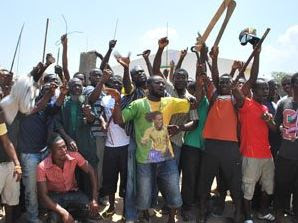 The Buhari Administration at the weekend declared that there are ongoing plans to implement one of its striking campaign promises that it will pay N5000 each to the poorest Nigerians across the country.

“Once this is completed, we will implement the first phase of this program, using recognized identification platforms and transparent payment solutions”, he added.

Osinbajo who disclosed this at the 10th Year Anniversary Lecture of Crescent University, Abeokuta, Ogun State titled, ‘The Nigerian Economy and the Future’, also said the federal government has identified the weak transmission grid, which prevents the wheeling of more than 5,000MW as a gridlock to be removed.

He assured that the Buhari administration would work with the distribution companies to ensure the necessary investment to get electricity to consumers is in place.

On the pervasive poverty ravaging the country, Osinbajo said the payment of N5000 each to poor Nigerians was necessary because “we cannot talk about the economy of the future without addressing how we move people out of poverty.

“One of the most striking promises we made during the campaign was the payment of Five Thousand Naira to the poorest Nigerians across the country”, he noted, even as he regretted that today, “about 112 million (66% of Nigerians) are deemed extremely poor, measured by World Bank parameter of those living on less than US$1.25 per day.”

The Vice President observed that the level of poverty explains much of the Nigerian situation because it affects all aspects of life,including why over a million Nigerians die yearly of preventable diseases.

“It reflects in our alarming rates of infant mortality and maternal deaths at childbirth. It also tells why so many children of school age are out of school and why so many adults lack access to healthcare and proper vocational training; why, in effect, they are less efficient and less productive at work”, Osinbajo noted.

Giving a succinct analysis of the nation’s economy, the VP said, “The vexed questions of the day pertain mainly to the economy. What is the real state of affairs? With so much reliance on a single commodity, how do we survive in an era of oil glut and falling commodity prices?

“With so many indications of waste, corruption and impunity, how do we set our economy on the right path? With so many unemployed, how do we offer hope and sustain the enthusiasm of our children still in school? And with so many of our consumer goods imported from abroad, how do we continue to live well without going bankrupt? Indeed, what is the place of Nigeria in the African and World Economy?” He further queried.

He lamented that, while many public servants were being owed arrears of salaries across the country, many traders are experiencing a downturn in sales.

“Artisans abound, whose businesses cannot thrive without power supply and many of our youths are searching in vain for employment”, the VP added.

On power generation, Osinbajo noted that the APC manifesto, is to deliver a minimum of 10% GDP growth annually, while ensuring an inclusive economy that improves the lives of all Nigerians.

This, he said, cannot happen unless we achieve a significant improvement in the power sector, even as he assured that the administration will focus on improving the supply of gas to power plants, which will ensure sufficient gas supply that will help maximize the 13,000MW of generating capacity.

His words: “The plans for the power sector will be supported with a National Infrastructural Master Plan that requires an investment of Three Trillion Dollars over a thirty-year period. This is the minimal requirement to improve our infrastructure stock from 35% of GDP to the benchmark for our peers, which is estimated at 70% of GDP.

“Apart from enabling manufacturing and other sectors, we expect that the investment in infrastructure will also directly create thousands of jobs in construction and maintenance activities”.

On the petroleum sector, the VP also noted that Nigeria has the 6th largest gas reserves and 8th largest crude oil reserves in the world, yet itnis struggling with high unemployment and low industrialization.

He regretted that “this embarrassment is compounded by the recurring scarcity of refined petroleum products which deal goes further still to harm our economy.

“Also corruption and a lack of transparency has dealt a massive blow on the petroleum industry thereby depleting our resources and creating a business environment which repels serious minded investors, whether locally based or international”, he added.

He expressed dismay that with the huge natural and human endowments in the country, the most recent World Economic Forum’s Report on Global Competitiveness Index (GCI) 2014 -2015 ranked Nigeria 127 out of 144 countries.

Osinbajo assured that in order to address the myriads of problems and challenges facing the economy, the Buhari Administration will tackle corruption in all sectors of the economy and establish a sufficient tax culture.

He further assured that the Administration will encourage Public-Private Partnerships and ensuring a transparent framework that reduces the bottlenecks in doing business.

“We are hopeful that an influx of domestic and international capital will begin to chase the huge opportunities in Nigeria very soon”, the VP noted, adding that the administration will give top priority to agriculture and education sectors.

Osinbajo expressed appreciation for the great work being done at the University to secure the future of Nigerian children and the country.

“Crescent University represents that bold effort of some private individuals in Nigeria who, of their own volition and with their personal wealth, decide to build institutions of higher learning”, he said.

Earlier, the Vice Chancellor of the University, Prof. Ibraheem Gbajabiamila, while welcoming the dignitaries who came to grace the occasion, said the students of Crescent University were doing well in their academics and are brought up in a well disciplined environment.

The Proprietor, Judge Bola Ajibola expressed gratitude for the Vice President’s visit as well as other dignitaries.

He said students of the University have maintained academic excellence nationally and internationally and all of them are accommodated in the school hostel, adding that “there is no cultism and other social vices”.