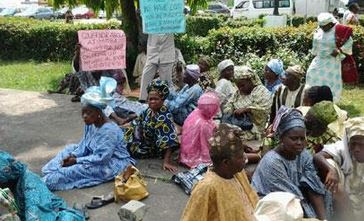 A civil servant, simply identified as Tunde, yesterday collapsed and died at government secretariat in Osogbo as striking workers and pensioners continue to protest non-payment of salaries in Osun State.

According to Vanguard,Tunde, who was a night watchman with Osun State government was said to have died following his inability to buy food and drugs due to non payment of his salary for seven months.

The night watchman attached to the Auditor-general’s Office was said to be on night duty when he collapsed and died at his duty post.

Reports said that the man who hailed from Modakeke may have died due to his failure to take his usual drugs for the management of an undisclosed illness. The incident drew the attention of staff of Auditor-General’s office where the man worked but all efforts to rescue him proved abortive.It took the effort of men of Nigeria Police Force and Civil Defence Corps to evacuate the corpse with hundreds of sympathizers on hand.

A similar case was also reported on Wednesday when a middle-aged man died owing to lack of money to purchase drugs.

Workers and pensioners in Osun State have not been paid in the past seven months.