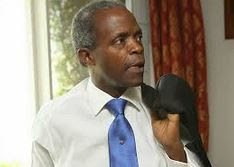 Vice-President Yemi Osinbajo was ‘locked out’ of President Muhammadu Buhari’s meeting with the National Security Adviser on the orders of the President.

Trent is reporting that a top Government source who pleaded anonymity disclosed on Wednesday that Vice-President Osinbajo was refused ‘security clearance’ to attend the meeting as a result of security concerns by the Commander-in-Chief allegedly over what he described as a “very sensitive meeting”.

According to the source, it was the thinking of the President that it was too early in the day to bring Vice-President Osinbajo into the President’s first security briefing.

The June 1 meeting with NSA Sambo Dasuki, which lasted for hours, was part of what sources called “debriefing process” and was done behind closed doors in the absence of the Vice-President.

Dasuki remained with the president till after 4pm when he left the Defence House, Daily Trust reports.

Buhari and Vice-President Osinbajo are yet to move into the Presidential Villa, 6 days after their inauguration.