Home Celebs Entertainment Gossip Why I can't shave off my beard... - Pete Edochie

Why I can't shave off my beard... - Pete Edochie 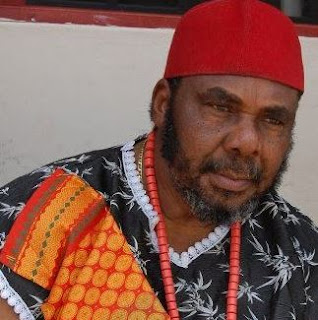 When Pete Edocie speaks, you know you are in for an inspiring and educating ride.In a new interview with Vanguard, the veteran actor speaks on his beard,politics and more..Excerpts

Your beard is as old as the grey hair on your head. Will you ever shave it off for any price?

No, I wouldn’t, no matter how much you would pay me. It gives me character. I have always played a big man in my movies. If I am not a leader of a cult, I am an Igwe or a native doctor. There must be something inspiring about you. Something that frightens people, that terrifies them, intimidates them when they know that you are coming. When you clean-shave, you lose that character.

For how many years have you been growing your beard?

I started growing beard when I was 23 years.

And you have not shaved the beard since then?

It’s not necessary. I could trim it, but I will not shave my beard. I will carry it till the end of my time. I have a lot of hair on my head, and there is so much power in the hair. You read about the Bible story of Samson and Delilah. Our Lord

Jesus Christ never shaved off his hair. There’s so much power in the hair.

People always mistake Rita Edochie, the actress for your wife?

In a way, she is. She’s my younger brother’s wife. Her husband is seven years younger than myself.

Is it true that you have a love child?

But a young man from Kenya alleged some time ago that his mother told him you are his father and he was planning then to come to Nigeria to meet you?

Why didn’t he come to Nigeria? I have never been to Kenya before. Where did I meet his mother? I am not a wayward person. Peter (pointing at his PA) has been my Personal Assistant for over 17 years. If I were a sexually adventurous person, he wouldn’t have stayed with me for this long. But each time somebody calls me he picks up the phone. Somebody brought the story from the internet and showed it to me.

One slim character like that. He looked like a cattle Rear-er. He said, “somehow I think Pete Edochie is my father.” Well! Let him come to Nigeria and meet his father. But he hasn’t embarked on the journey yet. Like I said, such things don’t bother me. I got married at 22 years. I have never involved myself in tense extra-marital affairs.

It’s not necessary. We are all weak as men, but you see, if you decide to pursue a torrid extra-marital relationship, what will you be proving to people? However, I don’t involve myself in situations that will make me to compromise my integrity and that of my family

Some entertainers are going into politics, are you planning to do so in future?

I don’t like politics. Politicians don’t speak the truth. Regrettably, there is no morality in politics. It doesn’t justify it. I want people to see me for who I am. If Pete Edochie says this thing is black, it’s black, there are no two ways to it. In the next ten years, he still tells you this is black. It gives me honour, it gives me integrity. But if tomorrow, I join politics and make a statement, people will begin to analyse it.

Whereas, in the movie industry today, I am the most respected actor. All the people who are part of the movies I feature in, respect me as their father. And it gives me a lot of honour and satisfaction because I see all of them as members of my family. So, I don’t like politics. Recently, a new administration came on board in Nigeria. A lot of people have been asking me about my expectations from the new government. And my answer is very simple, ‘Nothing.’

Buhari may stand out as an incorruptible creature. But what about the people under his administration? If Nigeria can be tinkered and rebuilt after Buhari’s image, we will have a wonderful country. But when you are so stuck in-graft, so stuck in corruption, it’s not always easy to get rid of these vices in a single day. I was following the progress of the now ruling party, APC, and I told a couple of my friends that this party has no ideology.

I kept wanting to hear from them, this is what we shall do and this is how we shall do it. I didn’t see or hear anything like that. The best politician this country has ever produced is Obafemi Awolowo. He may have been parochial but I love Awolowo for one thing. He would tell you I’m going to build this house, and this is what it will cost me to carry out the project. This is how I am going to raise the fund, and he went ahead and achieved it. No other politician has been able to beat the record in Nigeria.

Recently, Wale Adenuga, producer of “Super story” and Waptv Chairman alleged that Igbos have hijacked Nollywood. Do you agree with his observation

Comments are free but facts are sacred. People are free to say whatever they like, but a fact is a fact. Who make up Nollywood? The Igbos. Who started Nollywood? The Igbos. What are the films you remember most in Nollywood; ‘Living in Bondage” which was produced by an Igbo man, “Rituals”, ‘Igbodo”, Ëbuka” among others. They were all produced by Igbo filmmakers. I featured in about 90 percent of these films.

Yorubas have always done productions in Yoruba, so the circulation of their films is limited. If you travel out of the shores of this country today, people would want to talk to you about the Igbo culture. They would talk about the huge bearded man with a red cap and a walking stick.

This is the man they are referring to. When our people went for All African Games in Kenya, Nigerians were winning laurels in wrestling and the Kenyans said, they were not surprised because they came from Okonkwo’s country. And Okonkwo was a wrestler.

There are those who spend all their time trying to run other people down. But like I said, a fact is a fact. Whatever you say about me today, such comments don’t bother me. I am the only actor that BBC has flown into Nigeria to interview, and that was because of my infectious professionalism.

It’s not limited to just the local media alone. When you stay with the English man and you talk to him and he listens to you, he’s impressed. And if you travel out of the country, you will be told that there is no actor in Nigeria who manipulates the English language like Pete Edochie. What can you do about it? Nothing. It happens to be truth. Somebody called me on phone some time ago and said there are only two actors in Nigeria: Pete Edochie and others. I said, “thank you very much.”

ONCE HURT BY THE SYSTEM

I started acting practically before all of them. But I got hurt along the line. During the centenary celebration, my name was dropped. It was deliberate, conspiratorial. I saw it, and people wrote about it in the dailies and called me on phone. Even Former President Goodluck Jonathan was mad over it. Again, it happened, and I did not kill anybody for it.

At the end of the day, it is the way that your audience sees you that matters. AfricaMagic organized Viewers Choice Award and the entire continent said, this bearded man desired an honour and I was given a car. I have never angled for anything. Not at all. I have won more awards than anybody else in the industry. I don’t struggle for these things.

If you think I desire an award, then bring it. There is a university in Ekiti state that wants to give me an award. I keep getting invitations, but I don’t need all those awards. Three university Professors and a team at various times, volunteered to write my biography. But I told them not to worry about it. And I have since apologized to them.

I don’t see why it has to be me, and they said to me, ‘you are the most outstanding performer the country has produced over the years. I have won an award once as the best actor of the continent of Africa in 2001, before all these minor awards started coming my way. The body that gave me the award was based in South Africa. I didn’t campaign for it. Later, the Censors Board introduced an award in 2003, and Pete Edochi was adjudged the Best Actor in Nollywood.

Let it be said that, I spent my life giving joy to other people.