Woman collects money,holds down 14-year old to be raped [PHOTO] 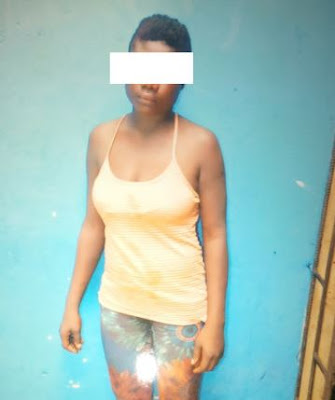 A 25-year-old woman, Nnena Okoro, has been arrested by the police after she reportedly lured a 14-year-old girl, Faith (pseudonym) to a hotel, where a man raped her.

Okoro lives in Sumoratu Estate, off Ojo Road, Lagos State, where the victim resides. She was said to have been Faith’s confidant.

PUNCH Metro gathered that on the noon of May 16, when the girl’s aunt, with whom she lives, was not around, Okoro approached her and requested that she accompanied her to the Barracks area to buy mangoes.

It was learnt that Okoro rejected the mangoes available in the area and went to Wowo, a nearby street, where the hotel was located.

Our correspondent was told that Okoro, who had allegedly collected an undisclosed amount from the fleeing rapist, lured Faith into a room in the hotel and shut the door.Faith said her mouth was covered, as Nnena aided the man to rape her.She said,

“Aunty Nnena (Okoro) said I should follow her to buy mangoes in Barracks Lane. She did not like the mangoes they had there and she said we should go to Ojo Road. We went to a hotel and met a man, who she called her friend. Aunty Nnena told me to enter a room. Suddenly, both of them dragged me to the bed. Nnena held my hand and covered my mouth with a cloth. The man pulled off my trousers and raped me. He left the hotel immediately he finished doing it and said he had paid Aunty Nnena.”

“I went outside crying. It was one woman around the area that helped to clean the blood coming out from my private parts when she saw me. She later took me to the Layeni Police Station.”

In her statement to the police, Okoro, who hails from Abia State, confessed to taking the girl to the hotel. She denied coercing the victim into the act and claimed that she had never met the man prior to the incident.

“Faith is my friend. On the fateful day, we both went to buy mangoes on Ojo Road. On getting to a hotel at Tolu, one man called her. They both discussed and the man paid N500 to the hotel attendant and they entered the room. I later left them inside the room to ease myself. It was when I came back that she told me that she was raped. I did not know that she was a virgin. We have never discussed anything like that before. Her pants were stained with blood. I have never seen the man before that day, but I can recognise him if I see him again.”

PUNCH Metro learnt that Okoro had been arraigned before an Apapa Magistrate’s Court on two counts bordering on the crime, while the police said they had launched a manhunt for the suspect