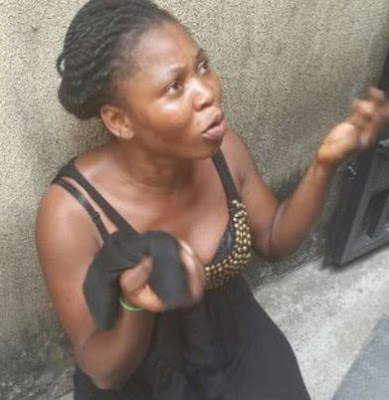 It seems someone is really bent on destroying this beautiful girl's life. I wonder what they stand to gain.

Yoruba actress Yetunde Akilapa who has been branded a thief due to a strange voice she claims pushes her to steal, has gone for deliverance twice now but the spirit is still very much acting in her. Just months after she was beaten mercilessly by a mob in the Magodo area of Lagos for finding a way into a man’s flat with the help of a master key, Yetunde has once again been disgraced at Yaba where she was employed as a makeup apprentice.

The lady who's teaching her makeup was said to have just stocked her shop with iphones, laptops and other gadgets she newly brought into the country. At the close of day, everybody went home, but Yetunde came back later at night with a master key...

SHOCKER: Her sister, Bose Akilapa who is so upset about her sister's dilemma, said their mother is behind Yetunde’s misfortune because she once cursed her. Angry Bose is said to have gone to call her mother names asking her to reverse the curse and in-between the argument she tore her mother’s clothes.

...she gained entrance into the store and took away some iphones, ipads and laptops before someone spotted her. She was accosted and arrested. Again, she blamed it on the strange speaking in her hears.

The shop owner who was later called rushed to the scene, called in the police who whisked her away. Two days after, Yetunde was released and this made the lady upset. She called in another set of policemen and they've re-arrested the troubled actress. She's in custody waiting to be charged to court.

What a life! I pray the good Lord help her out of this spiritual mess.