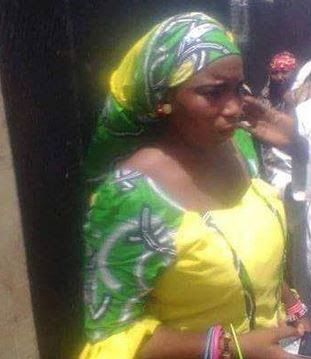 The lady who offered House and a Car for marriage, Zainab Abdulmalik has been admitted at the Dawanau Psychiatric Hospital, Daily Trust learnt from her family and hospital sources.

A true Yoruba family can't allow their daughter engage in such shameful act, I know this wouldn't happen.

Zainab who lured hundreds of youth with a car and house offer last Wednesday was admitted on Sunday at the hospital as her family believes she is "mad" to have become so desperate for husband.

Last week Tuesday, she announced on a local radio station, her intention to offer a gift of car to any man who would marry her after her boyfriend ate her money and dumped her.

In an interview, the head of the hospital, Malam Abubakar Ibrahim confirmed the admission of the lady, saying she has been their patient for long. He told Daily Trust, “Yes she is on admission in our hospital but this is not the first time she would be brought here. She has been an outpatient for long but she was brought here at the weekend.”

One of her relatives said she was rushed to the hospital because her mental challenge worsened after she had picked one of the suitors that thronged to the freedom radio to marry her.

“She was stable until when she was betrayed by somebody who promised to marry her after collecting money from her last year. Since then she developed mental problem and she has been on and off at the psychiatric hospital.

“Her condition relapsed at the weekend that was why she was taken to the hospital. If you go there now, you will see her because she is on admission,” he said.

It was gathered from one of her neighbours in Ayagi area of Kano state that the person that jilted her has been sued to court. “The guy’s parents live in Gandun Albasa area of Kano. When he was taken to court, he promise to be paying N50,000 monthly to refund her money,” he said.

He added that “we grew up with her and she was not having mental challenge until when the guy betrayed her. I used to be accompanying her to the guy’s parents house,” Jazuli Rabiu said.

When Daily Trusted contacted him on phone for his reaction, her father hissed and put off his phone.