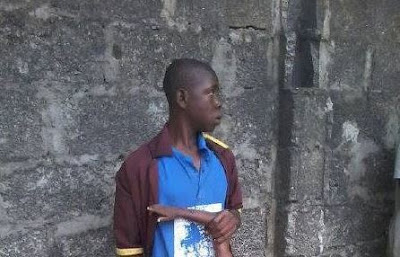 This has got to be one of the most painful/heartbreaking news I've heard in a while. A 16-year-old boy named Tajudeen Azeez, lured his 4 year old neighbour to a primary school in the Ijaniki area of Lagos, stabbed him, strangled him and removed his intestines, his kidney and cut off his penis. He did because a man named Osho had approached him and asked him to get him fresh human parts and would pay him N50,000. N50,000 is what a human is worth to some. N50k. Unbelievably sad!

"At first, I did not want to succumb to the temptation but it kept coming. When I woke up this morning (Monday), I saw Ibrahim at the back of the house. I told him to escort me to a primary school not too far from the house. The name of the school is Anglican Primary School, Ijanikin. He followed me to the place and on arrival there, I stabbed him with a knife from behind. He fell down and I strangled him with a rope. I then cut his stomach open with the knife. I am sorry for what I did,”

He was of course caught and made to carry the deceased body. The photo is extremely graphic so please be warned before you continue...

Tajudeen has been arrested by the Lagos state police command according to a report by Daily Trust and is currently at the homicide section of the State Criminal Investigations Department (SCID), Yaba.

According to the acting police public relations officer for the Lagos Command, Patricia Amadin, the body of the deceased has been deposited at a government mortuary. She said Tajudeen was arrested following intelligence information.


“Based on the strength of the information, the DPO and his men raced to the place. On arrival, they found the lifeless body of a four-year-old boy while the suspect was soaked in the deceased’s blood. From close observation, it was discovered that some vital organs such as the kidney and intestine had been removed from the deceased. All the organs were kept in a black nylon bag. The suspect was promptly arrested and taken to the station,” Amadin said. She said they are now looking for the said Osho.