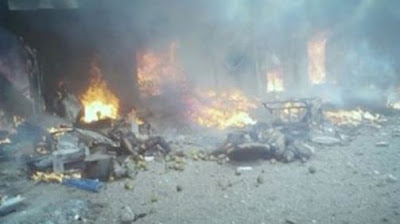 50 people lost their lives when two female suicide bombers detonated a bomb at a mosque in Damaturu,Yobe state .According to a statement by the Acting-Director of Army Public Relations, Col. Sani Usman ..


"This is to confirm that there were two suicide bomb explosions today at about 7:40 a.m. in Damaturu, Yobe, in which two female suicide bombers ,one elderly woman and a ten year-old girldetonated the devices.
It occurred at screening areas for intending Muslim worshippers at Layin Gwange, Damaturu and at Phase1, in front of former state secretariat, Damaturu,’’