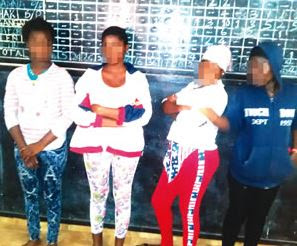 Six Nigerian women have been sent back to the country from the Burkina Faso where they were allegedly taken to for prostitution by a woman, named Balikis.

While re-uniting the girls with their parents in Ibadan, Oyo State, on Wednesday, the Comptroller of the Nigeria Immigration Service, Oyo State Command, Innocent Akatu, said the girls were tricked to leave Nigeria, adding that the victims did not tell their parents about the journey.

Akatu said the girls refused to engage in prostitution in Ouagadougu, Burkina Fasso, and were locked in a room by the trafficker.

He added that their journey back home after three weeks began when one of them escaped and alerted the Burkinabe police.He said,

“One of them was taken from her home in Ikorodu, Lagos State, and driven to Saki in Oyo State. When she asked why it had taken them so long to reach the airport, she was told that the plane had left and that they would have to travel by road.

“The Nigerian embassy assisted in arranging emergency travelling documents for them to return to Nigeria after their lucky escape. We have taken them to the hospital for screening and they are HIV negative.”

One of the returnees, Ganiyat Samuel, said she lived with her grandmother in Ikorodu before she embarked on the journey.

She said, “A woman, called Balikis, came to me and said that I would make more money as a fashion designer if I travel outside Nigeria. I told her that I had no passport, but she said that she would take care of it. I did not tell any of my parents.

“When we got to Saki, she said she could not get a passport for me because the office had closed. We travelled for two days to get to Burkina Faso. She took me to her house and told me that I would have to do HIV test. The test revealed that I was pregnant, but HIV negative. She told me that she brought me to the country for prostitution and that I would have to abort the pregnancy. I refused and she locked me in a room. When she brought another Nigerian a week later, I helped the girl to escape and she alerted the police. The police rescued us and arrested the woman.”

Samuel’s mother, Olasunkanmi Afuwape, said her father had died and after she re-married, she took the girl and her brother to live with her mother in Ikorodu.