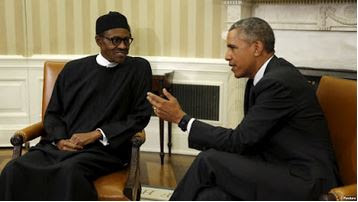 Speaking to reporters at the outset of the meeting, Obama said the US hoped to partner with Nigeria “so that Nigeria ends up being not only an anchor of prosperity and stability in the eastern part of the continent, but can also be an outstanding role model for developing countries around the world.”

“Recently we saw an election in which a peaceful transition to a new government took place. Nevertheless, the people of Nigeria understand that only through a peaceful political process that change can take place. President Buhari came into office with reputation for integrity and a very clear agenda, that is, to make sure that he has been bringing safety, security and peace to his country.

“He is very concerned about the spread and the violence that is taking place there and the atrocities, and has a very clear agenda in defeating Boko Haram and extremists. I want to emphasize how much I appreciate President Buhari’s work so far. I have seen him put together a team so that we can do everything that we can to help him succeed and help the people of Nigeria succeed.”

Obama, who further promised that American government would continue to partner with Nigeria in ensuring political stability in Africa and around the world, also commended Nigeria for taking leadership position in the fight against the spread of diseases like Ebola and Polio.

The US president said he would discuss with Buhari how the two nations can cooperate on counter-terrorism and how the US “can be helpful in addressing some of the corruption issues that have held Nigeria back.”