Buhari Praises Mbaka for Standing Up for Truth during last Elections 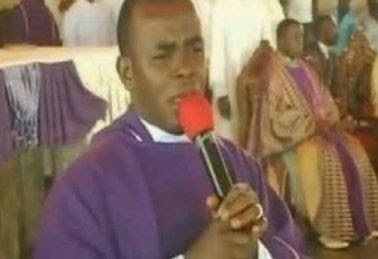 President Muhammadu Buhari has commended fiery Catholic priest, Ejike Mbaka, for his patriotism in the run-up to the 2015 general elections, saying his courage has earned him a mark in the sands of time.

In a statement Thursday to congratulate the leader of the Adoration Ministries Enugu, Nigeria, on the occasion of his 20th priestly ordination, the President said history would favour Mr. Mbaka for courageously speaking truth to power, even at great risks.

In the statement signed by Garba Shehu, his Senior Special Assistant on Media and Publicity, Mr. Buhari said Mr. Mbaka chose the part of honesty, despite realising that it could attract hostility from those he described as “leaders detached from reality”.

The President said the priest’s courageous actions, while the Peoples Democratic Party was still in power, was clear evidence that religious leaders are the custodian of truth and morals in society.

He said Mr. Mbaka’s decision to identify with the masses, and uphold the struggle for improved governance was enviable.

According to the statement, the President was extremely impressed by the priest’s sincere comments and patriotic disposition over the state of the nation at the time.

Father Mbaka had on December 31, 2014, told Nigerians to use the then approaching general election to vote then President Goodluck Jonathan out.