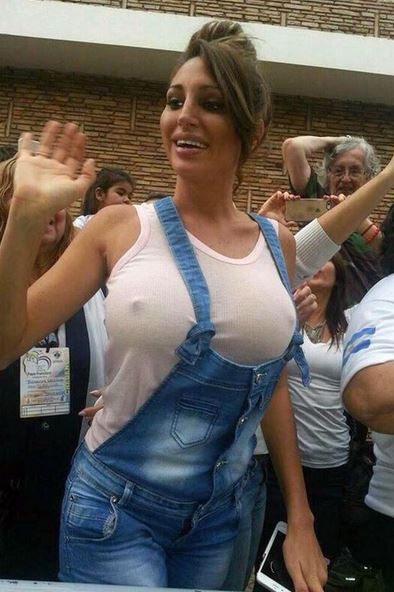 A glamour model was turned away when she showed up bra-less to meet the pope..Her appearance caused outrage as her top was so sheer and she paired it with a skimpy dungarees (above).

A skimpily dressed Victoria Xipolitakis was filmed standing in the front row of the crowds cheering Pope Francis dressed in Paraguay..

Following boos from the crowds of people queuing to greet the pontiff,a video captures her being led from the scene by security guards.

She is the same model who hit the headlines last month when she cost two pilots their jobs after taking selfies in the cockpit and even taking control of the plane.

She had repeatedly tried to gain a private audience with Pope Francis to persuade him to forgive her sins and had travelled to Asuncion in Paraguay to try and meet him.