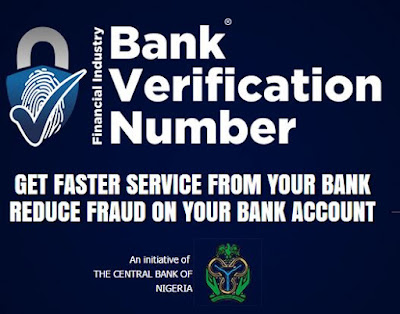 The Central Bank of Nigeria, CBN, has extended the registration for the Bank Verification Number (BVN) till 31st October, 2015.

Recalled that chaotic situations were recorded in most banks’ premises in Nigeria, Monday, as hundreds of customers besieged banks in a bid to beat the deadline for the BVN enrolment which was earlier billed to expire on Tuesday, 30th June, 2015.

Also, customers that have more than one bank account were also seen with pieces of white papers where the banks where they had registered wrote their unique BVN numbers to take to other banks to key in.

The BVN, a central bank initiative, which was launched in February 2014, is being supported by the bankers’ committee. It is aimed at protecting bank customers and further strengthening the Nigerian banking system. It was among other things, introduced to address safety of customers’ funds, avoid losses through compromise of personal identification numbers and other criminal activities in the industry.

The BVN is a unique number that enables one person to have a single identity in the banking system. It basically ensures that a customer’s identity is not stolen. A customer is only expected to register at one bank, irrespective of the number of accounts he has.